[Snobbery as Intellectual Power. Arthur Schnitzler’s Critique of his Time and the Cultural Debates about World War I]

After the publication of Thackeray’s The Books of Snobs (1848) the concept of “snob” became popular in German-speaking countries with the meaning of dandy and aesthete. In his diaries, letters, and posthumous notes, Arthur Schnitzler refers very criti­cally to snobbery as the “illness of the time”. This article argues that his critique does not merely address the radical aesthetical attitudes of his contemporaries (among them, e.g. Hofmannsthal). The purpose of Schnitzler’s critique is rather to denunciate the ideological implications of these attitudes – especially with regard to positions taken by many intellec­tuals in the debate about World War I. 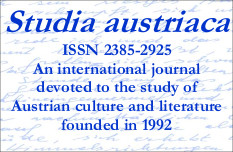