Time travel has been at times employed by writers and filmmakers alike as a means for addressing sociopolitical discourses. This is the case of the novel Kindred (1979) by Octavia E. Butler, and the film Sankofa (1993) by Haile Gerima. In both works, the topic of spatio-temporal migration is dealt with in such a way as to make a political statement in order to elicit a response on the part of the reader/viewer. Tightroping between fantasy and slave narrative, Butler and Gerima use time travel as a device investigating the amplified effect of old slavery on contemporary people. This essay approaches the idea of seeing old slavery through modern eyes. Experiencing the senselessness of old slavery from the apparently unreal perspective of a contemporary outsider may inspire the reader/viewer to minimize the typical desensitization with which contemporary slavery - still a very tangible phenomenon - more often than not is met today 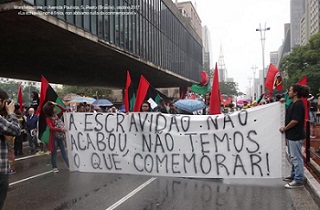