The year 1967 constitutes a turning point for the public image of Claudia Cardinale. Shortly before the tabloid press finds the birth certificate of her illegitimate child in London, the producer Franco Cristaldi hurries to marry her in the United States and soon he will affiliate the child: but the divistic construct of the “fiancée of Italy” has been shattered.

This article aims to reconstruct not what actually happened but what the tabloid press almost destroyed. In 1962, in fact, an impressive international image operation, called by the producer Franco Cristaldi and Fabio Rinaudo, the star’s press agent, “SuperCardinale”, had conceived a star system product resulting from a detailed image strategy. Even if the public story of the diva had been overwhelmed by the revelations of the tabloid press, her career did not break into pieces. A new story was already in place. The Vides star shows off in the pages of the popular magazines along with other single mothers of the Italian show business. On May 6, 1967 she takes part to an audience with the Pope Paul VI wearing a miniskirt: in so doing, she exploits the character of the penitent Magdalene to promote her role as an ex prostitute in “Once Upon a Time in the West” by Sergio Leone.

The text is divided into two parts. The first section highlights a number of new archival findings on the image operation created by Vides, while the second is dedicated to the retrospective story of the star. 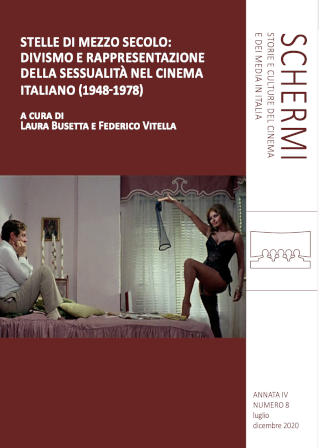