It has been almost 60 years since the first results from the Early Permian Bolzano Quartz Porphyries from the Trento Plateau of northern Italy (Southern Alps) showed paleomagnetic inclinations steeper than inclinations from broadly coeval units from central Europe. This experimental discrepancy, confirmed ever since at varying levels of magnitude and certitude, implied that northern Italy had paleolatitudes too northerly relative to Europe to be considered part of the European continent. On the other hand, it became progressively more apparent that paleomagnetic data from northern Italy were more compatible with data from Africa than with data from Europe, and this observation revived and complemented Argand’s original concept of Adria as a promontory of Africa. But if Adria was part of Africa, then the paleolatitude anomaly of Adria relative to Europe translated into a huge crustal misfit of Gondwana relative to Laurasia when these landmasses were forced into a classic Wegenerian Pangea as typified by the Bullard fit of the circum-Atlantic continents. This crustal misfit between Gondwana and Laurasia was shown to persist in the ever-growing paleomagnetic database even when data from Adria were provisionally excluded as non-cratonic in nature. Various solutions were offered that ultimately involved placing Gondwana to the east (allowing it to be more northerly) relative to Laurasia and envisaging a dextral shear occurring in the Tethys (Mediterranean) realm between these supercontinental landmasses. This shear or transformation was initially thought to occur as a continuum over the course of the Mesozoic–Cenozoic (the so-called ‘Tethys Twist’) but soon afterwards when plate tectonics came into play and limited the younger extent, as a discrete event during the post-Triassic, Triassic or most probably – as in the latest and preferred reconstructions – the Permian between a configuration of Pangea termed B – with the northwestern margin of Africa against southern Europe – to a configuration termed Pangea A-2, with the northwestern margin of Africa against eastern North America, that is more proximal in shape to the classic Pangea A-1 that started fragmenting in the Jurassic with the opening of the Atlantic Ocean. The Permian timing and presumed locus of the ~2300 km dextral shear is supported by rotated tectonic domains in Sardinia and elsewhere along the interface between Lauarasia and Gondwana. The concept of Pangea B and its transformation into Pangea A developed therefore in close conjunction with the concept and paleomagnetic support of Adria as a promontory of Africa, and has ramifications to many aspects of tectonics, climate change and biogeography yet to be explored. 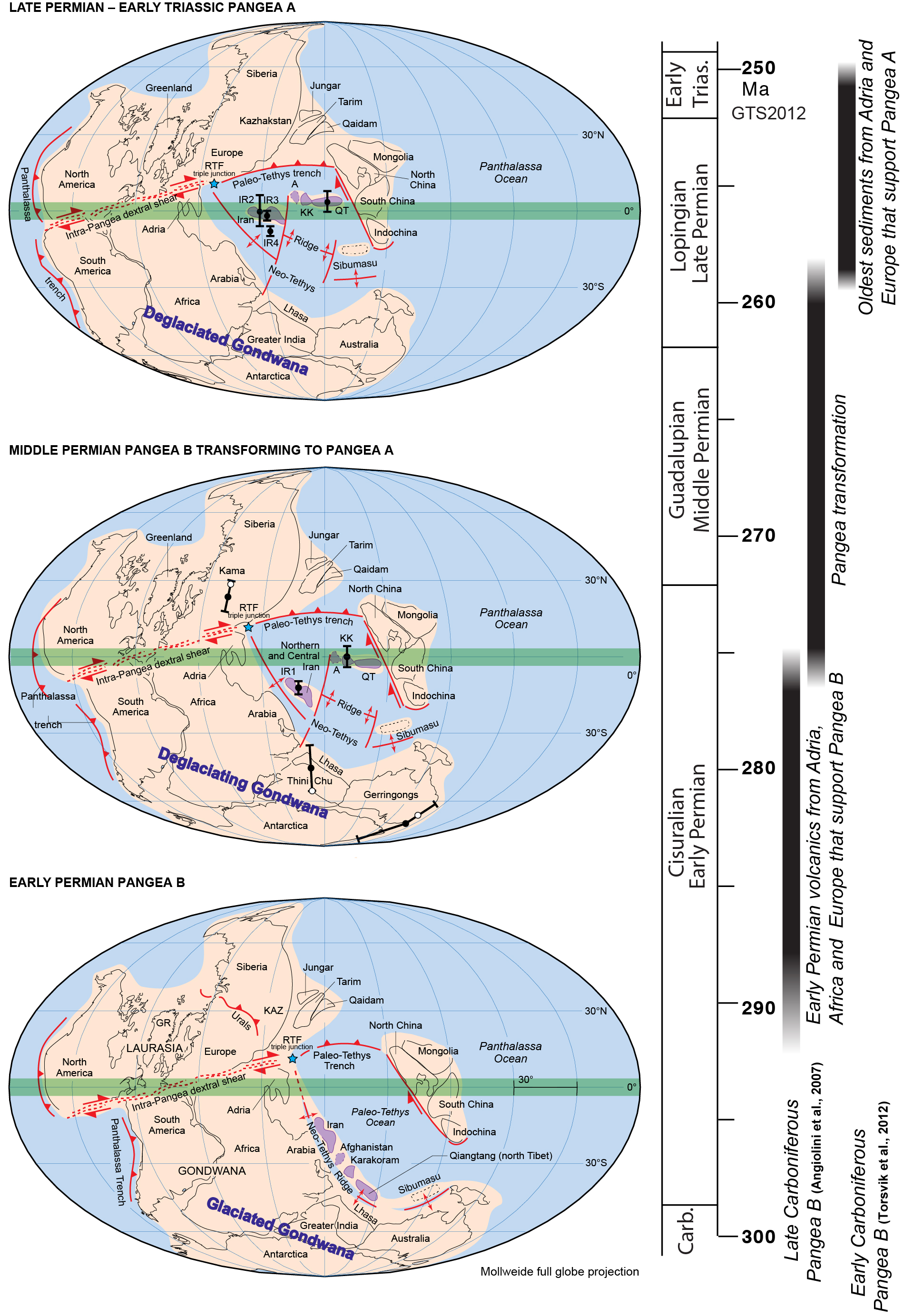