FISH OTOLITHS FROM THE LATE MAASTRICHTIAN KEMP CLAY (TEXAS, USA) AND THE EARLY DANIAN CLAYTON FORMATION (ARKANSAS, USA) AND AN ASSESSMENT OF EXTINCTION AND SURVIVAL OF TELEOST LINEAGES ACROSS THE K-PG BOUNDARY BASED ON OTOLITHS

Otolith assemblages have rarely been studied across the K-Pg boundary. The late Maastrichtian Kemp Clay of northeastern Texas and the Fox Hills Formation of North Dakota, and the early Danian Clayton Formation of Arkansas therefore offer new insights into how teleost fishes managed across the K-Pg boundary as reconstructed from their otoliths. The Kemp Clay contains 25 species, with 6 new species and 2 in open nomenclature and the Fox Hills Formation contains 4 species including 1 new species. The two otolith associations constitute the Western Interior Seaway (WIS) community. It contains the earliest unambiguous representatives of the Gadiformes (cods and hakes) and the Heterenchelyidae (mud eels). The WIS community differs significantly from other Maastrichtian otolith assemblages previously studied from Mississippi and Maryland, which constitute the Appalachian community, with only 4 shared species (similarity percentage of 7.3%) between both communities. The difference is interpreted to be related to cold-water influence in the WIS community, which may have still been connected to the Arctic Basin, and to the depostional environment (muddy bottom) in the Kemp Clay.

The Kemp Clay is unusually rich in taxa that survived the end-Cretaceous extinction event and are still present in the Danian of the Clayton Formation, or, as the case may be, in the Danian and Selandian of the boreal northern European community known from Denmark. Approximately 54% of all otolith-based teleost species identified from the Maastrichtian WIS community survived the K-Pg boundary event (versus 11-12% in other communities) and 73% of the genera (versus 40-50% in other communities). The early Danian Clayton Formation contains an impoverished inherited association with 14 species, of which 11 are survivors from late Maastrichtian times, 1 species is new, and 2 remain in open nomenclature. This compares to a significantly higher degree of newly evolved species in only slightly younger faunas from the middle to late Danian and Selandian of Europe indicating an initially slow pace of recovery.

The observed differences in survival and the composition of survived and extinct taxa are discussed in the light of the ongoing discussions concerning the consequences and effects that led to the end-Cretaceous extinction event commonly thought to have been caused by a large meteorite impact. In our assessment, an ‘impact winter’ could have had a major influence on the live cycle of tropical to subtropical fishes while perturbations in the pelagic food web or ocean surface acidification might have had a minor and more selective effect. Overall, teleost fishes were significantly affected by the end-Cretaceous mass extinction, but to a much lesser extent than in many other biota. This study provides more evidence of the importance of Late Cretaceous otolith assemblages in the USA for interpreting teleostean evolution. 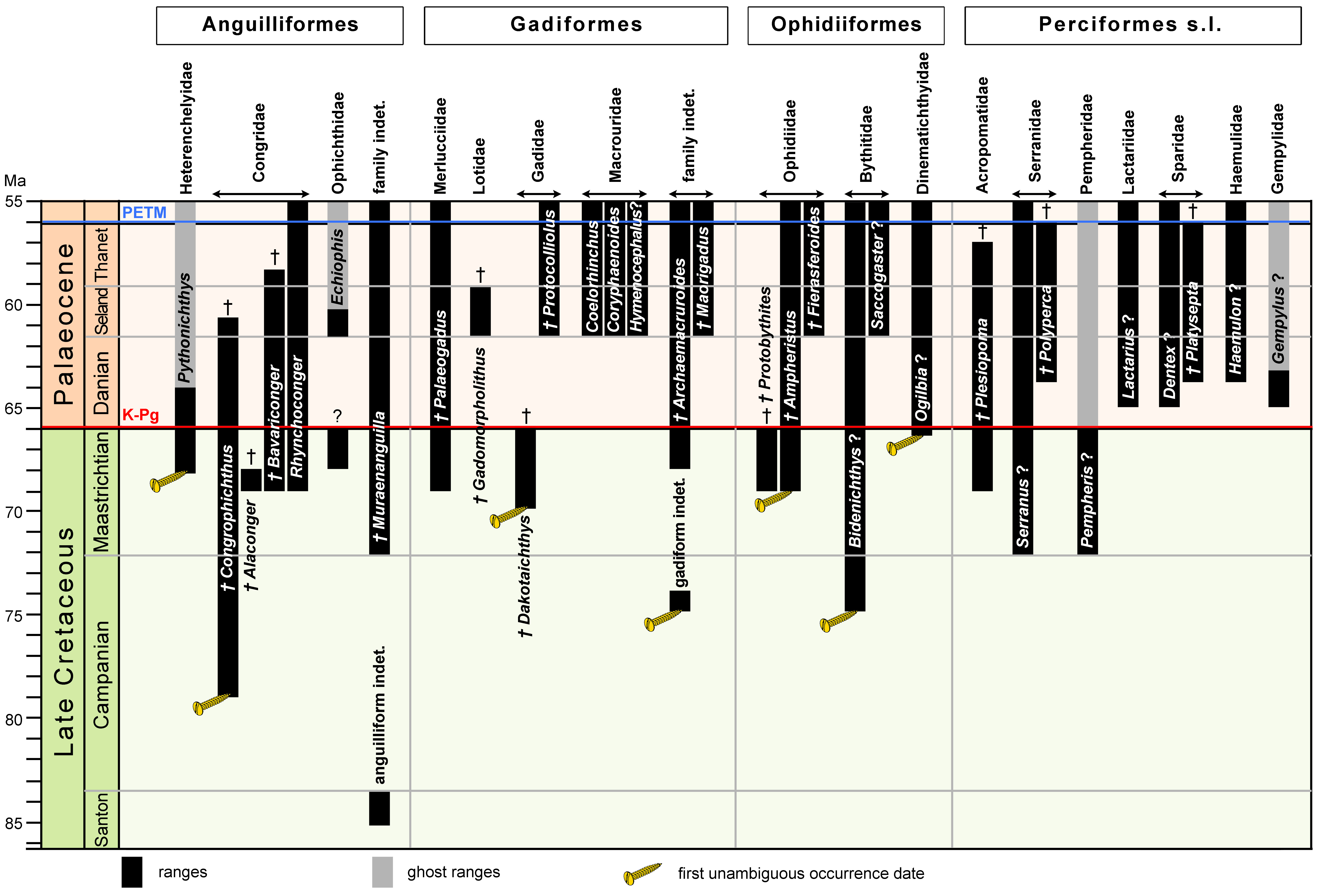